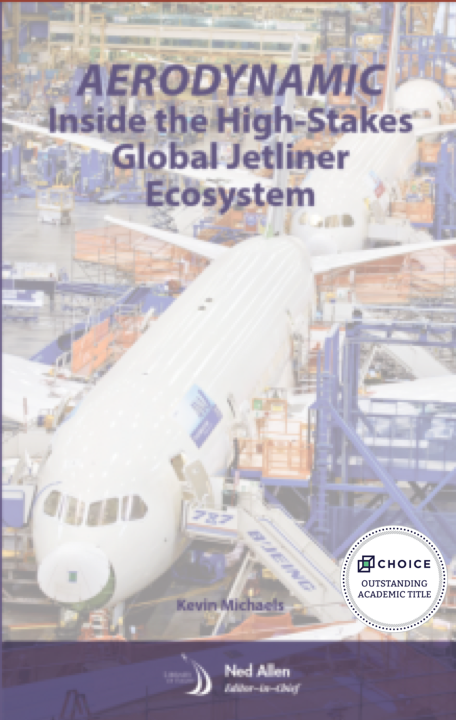 AeroDynamic: Inside the High-Stakes Global Jetliner Ecosystem traces the transformation of the commercial aircraft business from 1990 to the present. This $300B industry is not only the pinnacle of high technology and advanced manufacturing; it is also amongst the largest export industries for many advanced economies and a key enabler of military aerospace and national defense.

While high-profile manufacturers like Boeing and Airbus receive the lion’s share of media attention, AeroDynamic approaches the industry from an ecosystem perspective. There are hundreds of suppliers behind each shiny new aircraft that rolls off the assembly line. Indeed the major aircraft manufacturers account for just 40% of total aerospace activity; AeroDynamic shines the light on the other 60%.

Several narratives are explored including the:

Written in an engaging, accessible style, AeroDynamic is a must-read for aerospace executives and managers, government and economic development officials, undergraduate and graduate engineering and business students, management and investment advisors, and aviation enthusiasts.

This is the best book written since John Newhouse’s The Sporty Game on the fascinating and important jetliner industry.

AeroDynamic is a fascinating history of the civil aviation ecosystem and captures the depth and nuance of how this unique industry works. This is a must-read for anyone interested in aviation.

A comprehensive and balanced look at the fascinating and complex business of producing airliners. Kevin has sought to go beyond the sound bite and provide a clear insight into this incredible industry.

Finally, a well-researched deep dive into the complex global supply network that is the 21st century commercial aviation industry.

AeroDynamic shines the light on many important and underappreciated events and forces that have shaped the commercial aerospace business, including the regional jet revolution, the significant contributions of engine and systems suppliers, and the importance of the aftermarket.

AeroDynamic weaves the story of the development of the strategic raw materials sector into the jetliner industry.

Richard Aboulafia, Vice President of the Teal Group, has this to say about the book…

Michaels set out to write a counterpart to John Newhouse’s timeless The Sporty Game (out of print; just 43 copies on Amazon as of this writing), which was followed several decades later by Boeing Versus Airbus (see my December 2006 letter). While the Newhouse books looked at the high politics and big business at the top of the industry, Michaels has written a comprehensive overview of the technologies and players at all levels of jetliner manufacturing. It’s just as dramatic, and, if you’re in the industry, just as useful.

The Sporty Game focused on the jetliners themselves, which, in 1982, were still a relatively youthful industry. It also focused on engines, the only non-airframe part of the industry that really mattered back then. AeroDynamic, in addition to covering jets and engines, devotes essential chapters to all major tiers of the business, including Brainiacs (avionics), Skin And Bones (materials), Interior Designers (seats and interiors), Lifeblood (MRO), Gearheads (how Pratt & Whitney’s Geared Turbofan changed the engine world), and Unsung Heroes (APUS and most everything else).

It isn’t just that AeroDynamic takes a different approach to the industry than The Sporty Game; comparing the two shows how much has changed over 36 years. So much of the value in this industry, and the profits, and the innovation, have migrated from the top primes to the suppliers. “Aviation” is almost an old fashioned term today, compared with “Aerospace.” We’re no longer looking at mere aircraft; we’re looking at complex systems that involve the integration of very high value components. The A320neo and 737MAX might represent the first time that jetmakers were forced to launch new products because of decisions taken at the supplier level (the creation of new engines, whether the primes wanted them or not).

This changing balance of power also shows why Boeing and (to a lesser extent) Airbus are now focused on reclaiming profits, intellectual property rights, and aftermarket revenue from their suppliers, with programs like Partnering for Success and SCOPe+. The book’s Supply Chain 2.0 chapter shows why Michaels is the world’s best thought leader on intra-industry relationships.

The most interesting aspect of AeroDynamic is its treatment of emerging producers. In The Sporty Game’s time, Japan was the emerging producer, an idea that fizzled in the ‘90s. If an aero industry book had been written a decade ago, China would have been the future (and in the ‘90s, Indonesia, goofily enough). Michaels avoids this trap, spending little on wannabe jetmakers and instead looks at new places where suppliers put actual work. The chapter Four Clusters and a Funeral looks at Singapore, Morocco, Mexico, and the US Southeast. There are exciting things happening in these regions, and they tell us a lot about the future. If there is a retreat from “globalism” among nationalist losers, our industry does a great job bucking the trend.

Michaels travelled to these places, and really knows what makes them tick. The chapter makes it clear that national aircraft are a fool’s game. Brazil’s national jet family will soon be in Boeing’s hands. Canada’s national jet family is now in Airbus’s hands. China’s national jet families are best regarded as winged train wrecks (I’d say flying train wrecks, but they’re not great at flying). Instead, as the four clusters clearly show, the best way to join this industry is to be a supplier, leveraging your unique strengths to fit into the global supply chain. A profitable and diversified portfolio of technologies and contracts beats building a winged tube with a flag on the tail.

The chapter’s funeral, a slightly overstated term, is for Southern California, which I would argue is far from dead. Michaels correctly chronicles its decline, but really there’s still plenty of life in the region, particularly since Northrop Grumman will build the B-21 in Palmdale, with very positive implications for other suppliers in the region. But then again, Boeing has just announced that its legendary Long Beach facility will be put on the market. Since the home of Douglas jetliners and the C-17 will soon be just another dystopian strip mall with nail salons and payday loan shops, “funeral” is an understandable term to use.

AeroDynamic nails the complicated interface between technology and business (cool tech doesn’t always equal profits) and also does great with macroeconomics (interest rates, global economic growth, oil prices, and other factors that impact the industry). However, compared with The Sporty Game, it doesn’t pay a lot of attention to high politics. Various heads of state populate Newhouse’s book, with about 40 pages referenced in the index (Nixon’s in the lead for most references). National chiefs and international relations aren’t big players in AeroDynamic.

But this difference between the two books reflects our industry’s changed status rather than any neglect by Michaels. Jetliners were once at the center of global power politics (see Jeffrey Engel’s Cold War At 30,000 Feet: The Anglo-American Fight For Aviation Supremacy); today, they’re regarded as just another sector of the manufacturing economy, like cars or power generation equipment. Politicians focus instead on Facebook, Amazon, and Baidu. And while politicians can enact trade barriers that damage our industry, there’s very little they can do help us. The Sporty Game was written at a time when politicians de-regulated the airlines, pooled European resources to create Airbus, and helped coordinate one of the biggest multinational JVs ventures ever (CFM International). What can politicians do for the industry today?

Despite the nuts and bolts subject of AeroDynamic, Michaels writes with the clear, tight prose you’d expect from someone who had to distill his many great insights on a complex industry into a single volume. This is a page-turner. And, just as Newhouse did in The Sporty Game, Michaels pays close attention to the fascinating decision makers and industry leaders that have made the industry what it is today. If you’re in the aerospace industry, you should have this book on your shelf. And if you’re not in this industry but still want a great overview of a fascinating business, this book is exactly that. 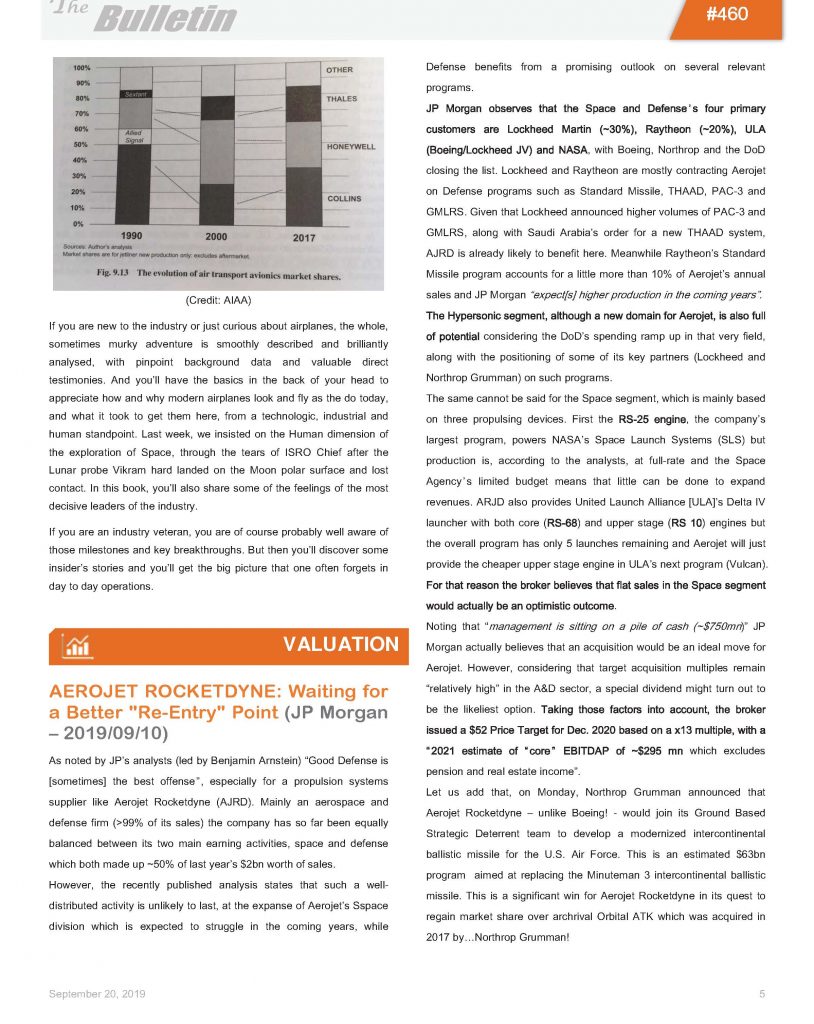